Uses and Demand
OverviewHistoryPros and Cons

Nuclear power is primarily used for ship propulsion and electricity generation. About 11% of the world’s electricity comes from nuclear power. Some countries rely on nuclear energy for most of their electric power. It also plays an important role in medicine, industry, science, food preservation and agriculture:

Physicians use radioisotopes to identify and investigate the causes of disease. They also use them to enhance traditional medical treatments.

Radioisotopes are also used by industry to measure microscopic thicknesses, detect irregularities in metal casings and to test welds.

Archaeologists use nuclear techniques to date prehistoric objects and to locate structural defects in statues and buildings.

Nuclear irradiation of food (treating food with ionizing radiation that kills bacteria and parasites) causes less vitamin loss than canning, freezing or drying in food preservation, and it can cut down on food borne illnesses.

With 58 nuclear reactors, France produced enough nuclear power to supply about 75% of its electricity needs. It is the country leading in nuclear power utilization for electricity generation. The US, which has 99 reactors, is relying on nuclear power to meet its 2050 carbon emissions targets. The Three Mile Island accident of 1979 stopped new additions for many decades and production was increased only by improving existing reactors. Ukraine, which suffered from Chernobyl, the worst nuclear disaster of all time, plans to add 11 more reactors to its existing 15 plants to double nuclear power. 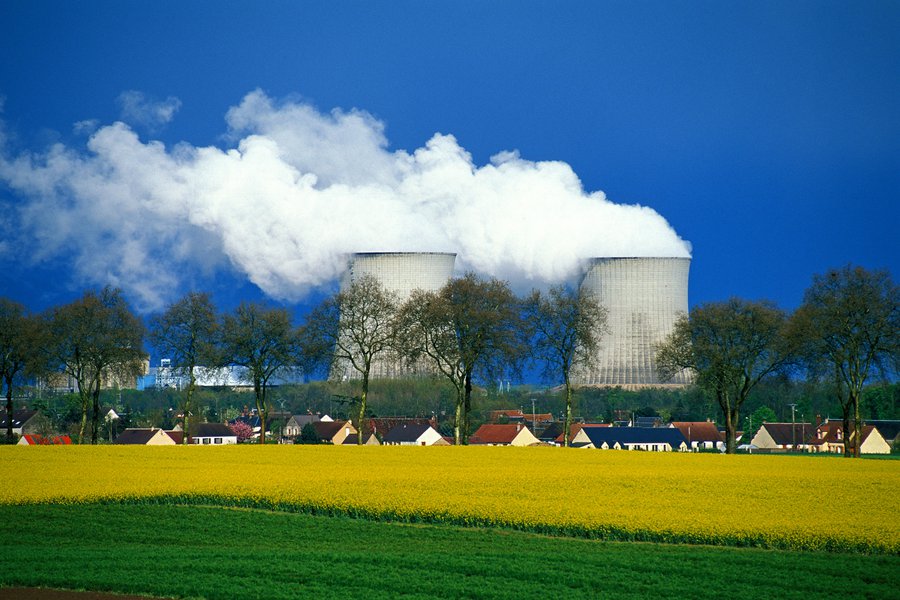 Nuclear power station in Saint-Laurent-Nouan, France which began operation in 1983.