Fuels like biofuels and hydrogen are becoming increasingly prevalent as new transportation sources. The technologies behind the sources vary greatly in efficiency. The average gasoline-fueled car is 25% efficient meaning that 75% of the fuel used does not go into propelling the vehicle but, instead, is lost as heat and other energy expenditures.

Hydrogen is one of  the alternative fuels being used because of its ability to consume clean and affordable energy. Hydrogen fuel cells produce electricity by combining hydrogen and oxygen atoms. Hydrogen-powered cars operate on the reaction between hydrogen stored in a high-pressure tank and the oxygen absorbed from the air outside. This reaction generates energy that feeds the electric motor. A fuel cell is two to three times more efficient than an internal combustion engine running on gasoline. Hydrogen use in vehicles is a major focus of fuel cell research and development.

This resource, combined with liquefied natural gas from places like Qatar, Australia, Malaysia and the US, constitutes a clean and realistic alternative to gasoline. Already a proven technology, many challenges still remain—pipelines, service stations and vehicles must all be adapted to accommodate the fuel. 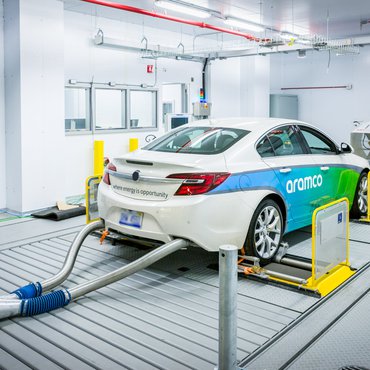 Aramco recently unveiled to the public for the first time its low CO2 Class 8 heavy-duty truck that utilizes one of the company’s flagship technologies, a mobile carbon capture system that dramatically reduces CO2 emissions at the tailpipe.

Ethanol and biodiesel are transportation fuels made from biomass. Although these fuels are usually blended with petroleum fuels (gasoline and diesel fuel), they are cleaner-burning fuels.

Ethanol is an alcohol fuel made from the sugars found in grains such as corn, sorghum, and barley. There are many other sources of ethanol including:

Scientists are working on ways to make ethanol from all parts of plants and trees rather than just grain. Farmers are experimenting with fast-growing woody crops such as small poplar and willow trees and switchgrass to see if they can be used to produce ethanol.