Sustainability
"It's a long race, but it is a race. We can't afford to sit back because its going to take a long time. It's a marathon."
— Dr. Sally Benson, Global Climate and Energy Program, Stanford University

According to the International Energy Agency (IEA) Energy demand worldwide grew by 2.3% in 2018 driven by a robust global economy and stronger heating and cooling needs in some regions. Natural gas led the increase, accounting for 45% of the rise in energy consumption. Gas demand growth was especially strong in the US and China. Demand for all fuels increased, with fossil fuels meeting nearly 70% of the growth for the second year running. Solar and wind generation grew at double-digit pace, with solar alone increasing by 31%. Coal use was up to meet higher electricity demand around the world that also drove up coal use.

With demand growing rapidly, how can we make the energy transition to clean energy. According to the EIA, renewable energy is the world’s fastest growing form of energy, but fossil fuels will continue to meet much of the world’s energy demand.

Ten Facts about The Energy Transition

The Role of Hydrogen in the Energy Transition

Hydrogen and fuel cell technologies have significant potential to enable this transition to a clean, low-carbon energy system. Completing this transition will result in greatly reduced greenhouse gas emissions and improved air quality.

Hydrogen is a versatile, clean, and safe energy carrier that can be used as fuel for power or in industry as feedstock. It can be produced from (renewable) electricity and from carbon-abated fossil fuels. It produces zero emissions at point of use. It can be stored and transported at high energy density in liquid or gaseous form. It can be combusted or used in fuel cells to generate heat and electricity. 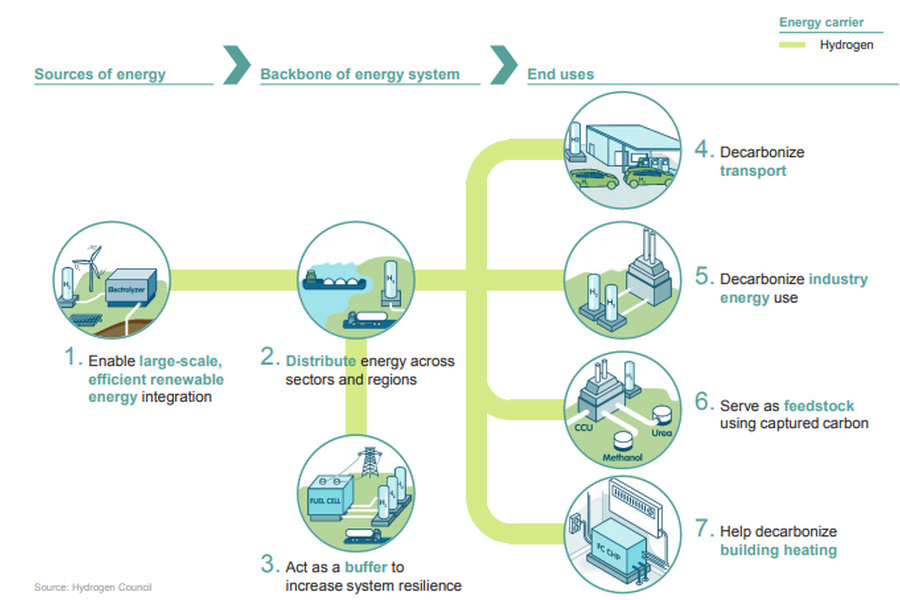